Hello finance professionals! Today let’s talk about why Convertible Bonds are once again picking up steam as a popular investing choice for institutional investors, venture capitalists and equity investors.

Amidst the volatile markets of the pandemic, a huge number of start-ups and companies with a cash-crunch found that raising money through hybrid instruments like convertible bonds was a more lucrative choice compared to traditional equity or debt. And the numbers don’t lie. In the year 2020, more than $188 billion in convertible bonds were issued worldwide.

Interestingly, the last time the world saw such a surge in popularity of convertible bonds was way back in 2008 (during another time of global uncertainty), when the amount of convertible debt issued was more than $86 billion.

To understand the business advantages of issuing convertible bonds, let’s take the example of Southwest Airlines.

In this way, they managed to become the country’s largest domestic air carrier, capturing more than 25% share of the domestic air travel market in the US, with this strategy that has proved effective for almost 5 decades.

When global travel was halted in April 2020, Southwest issued $2.3 billion 1.25% convertible note (due in 2025), to help the company with an influx of cash which would help it tide uncertain times. The conversion price was set at $38.48 per share.
Note: the market price of the share around that time was approximately $28. As of 16 November 2021, the share price was hovering around $48.

Why are convertible bonds so popular during volatile times?

Thus to put it simply, convertible Debentures offer the advantages of equity while negating the risk of uncertainty with its bond-like features.
It enables investors to be a part of the growth or turnaround story of the company without the inherent risks of traditional equity investing.

More about the Instrument: Convertible Debt

Just like any other debt or bond, convertible debentures are issued with a fixed coupon rate, a maturity date, and a redemption value. They also include a conversion option (at the option of the holder or the issuer) which allows an exchange of a certain number of shares of the issuer’s company at the time of redemption of debentures instead of cash.

When will the bonds convert (and how will an investor gain from it)? 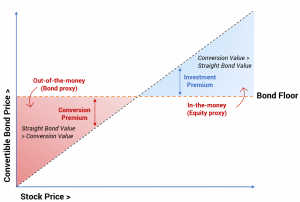 The conversion ratio of such instruments is generally set at a price which is at a premium of around 30-40% of the existing share price. Thus the option is “out of the money” (see the red area in the chart above) until the share price goes above the bond floor price (PV of coupon payments and par value of the instrument).

Now that we’ve discussed convertible bonds at length, let us find out how they’re presented and accounted for as per IFRS 9, with a simple example:

Let’s assume Sunshine Ltd. issued 1,000 nos. convertible bonds maturing in 5 years, with a face value of INR 1,000 each. They carry a coupon rate of 4% per annum, payable annually at the end of the year.

At the option of the holder, the bonds can be converted into equity shares instead of cash redemption at the end of 5 years.

The total proceeds received are thus INR 10,00,000. Market rate of interest for bonds without a conversion option is 6%.

Classification as per IFRS 9: It is a compound financial instrument as it contains the below 2 elements:

Now that we have understood the concept, let us see how to account for this compound financial instrument: 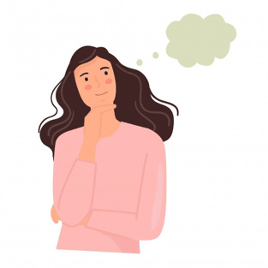 If you have any doubts or if you’d like to discuss IFRS 9, feel free to drop me a line on my LinkedIn profile! Lastly, if you think this article would prove useful to someone, do share it with them. 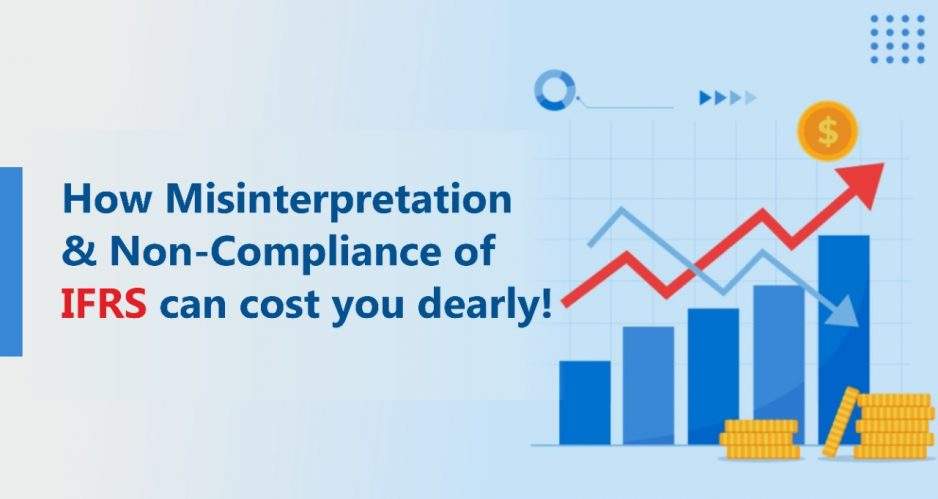 Hello fellow-finance professional!
I wanted to share a few astonishing facts from an interesting session that I recently conducted on IFRS 9 – Financial Instruments:

What is the biggest reason behind such non-compliance?

The top reasons that have been identified behind non-compliance by corporates are:

Under these circumstances, corporates place high value on employees who can help avoid or prevent companies from incurring such high regulatory costs!

Hence, it becomes imperative for finance professionals to acquire a thorough understanding of the Financial Reporting Framework, so that they can add significant value to their firm, and shine as a professional.

In a previous blog, I discussed how to determine if preference shares are debt or equity, and some real-world examples on their effect on the Debt-Equity ratio of a company. Read it here!

Today, we will find out how misinterpreting IFRS 9 led this large private-sector bank to be slammed with an INR 2 crore penalty!

As per the Reserve Bank’s licensing norms, a private bank’s promoter holding has to be brought down to 40% within 3 years of operations, 20% within 10 years and 15% within 15 years.

In line of this, RBI mandated Kotak Mahindra Bank Limited to reduce its promoter shareholding to 20% by December 31, 2018. To comply with the same, Kotak issued perpetual non-convertible preference shares which it said would reduce promoter stake from 30.3% to 19.7%.

The bank was of the opinion that this class of preference shared would be a financial liability and will not form part of equity. However, for preference shares to be considered as liability or debt, the following must also be true:

– there must be fixed percentage of dividend, and a contractual obligation to deliver cash
– the bank (issuer) must mandatorily redeem the preference shares for a fixed/determinable amount at a future date
– the holder must have the right to require the bank (issuer) to redeem the shares at a future date for a fixed/determinable amount.

In the absence of the above, the RBI did not agree with the classification of the instrument as a financial liability and maintained that the class of instruments continued to be “equity” instruments, with the promoters retaining their voting rights and stake.
The Reserve Bank went on to impose a penalty of INR 2 crores on Kotak Mahindra Bank Limited for non-compliance in dilution of promoter’s shareholding!

This is how the implications of IFRS 9 with regards to classification of Financial instruments, can have significant financial and legal impact on your business!

After understanding how misinterpreting the reporting standards can have a grave financial as well legal impact on companies, I hope you will now be able to assess:

I would love to discuss these in detail with you. If you have any doubts or if you’d like to discuss IFRS 9, feel free to drop me a line on my LinkedIn profile! Lastly, if you think this article would prove useful to someone, do share it with them.

While it is a general perception in the financial world that IFRS 9 – Financial Instruments could result in volatility in reported income of many companies (on account of assets being measured at fair value, and resulting change being reflected in the statement of profit and loss) – there is another significant impact of this standard on the “leverage” ratio on the financial statements of many companies.

What is leverage and leverage ratio?

In business terms, leverage means debt i.e., external fund (Borrowing) can be “leveraged” to increase the returns of a company. One of the most important leverage indicators (the Debt-to-Equity ratio) essentially shows the proportion of a company’s funds sourced from debt and how much are sourced through owners’ equity.

What is an optimal Debt-to-Equity ratio?

Exactly how much debt is ideal for a business depends on the company’s requirements from time to time and the company’s nature of operations.

For instance, capital-intensive industries such as manufacturing commonly have higher levels of debt than say, a company operating in the service industry such as Information Technology industry.

A classic example of the above: The Debt-to-Equity ratio of Tata Motors as of 31 March 2021 was 2.08 times (meaning debt is twice the amount of shareholder capital). Since the company is an automobile manufacturer requiring heavy infrastructure generally requires higher debt to fund the purpose of operating assets. As the borrowings are backed by capital assets a leverage of more than 2 times would not be so alarming.

An interesting point to consider here is: Do you think TCS is over-relying on equity funding? Let me know in the comments!

How one of the biggest Indian conglomerates aspires to become a debt-free company!

In a bold (and boastful?) move, Reliance Industries Ltd. chairman Mukesh Ambani declared in July 2020 that RIL had ambitions to become Net Debt-free! Which essentially meant the company had enough cash and marketable securities to pay off its existing debt.

To that end, the company repaid more than USD 21 Billion of its debt after raising over USD 44.4 billion of capital (including noteworthy investors like Facebook and Google’s acquisition of around 18% stake in Jio worth USD 10.2 billion), which was the largest ever capital raised by any company in a year globally.

A Major wave of Deleverage in the Steel Industry!

Another recent example of de-leveraging: While an increase in global steel prices might have been a cause of concern for end-consumers, it was a dream run for the major steel players in India, who went on a de-leveraging spree – managing to pay off a whopping 15% to 35% of their total debt by taking advantage of the global price rise! The below table illustrates the considerable decrease in Debt-to-Equity ratio for this capital-intensive industry:

Why is the Debt-to-Equity ratio an important financial metric?

Now that we have understood the significance of Debt-Equity ratio, let’s understand how IFRS and its principle of “substance over form” can impact the leverage ratio even without raising any additional capital!

The said entertainment conglomerate had in its balance sheet “redeemable preference shares” which are preference shares issued to shareholders having a callable option implanted by default. This implies that the company can repurchase this class of shares against cash from the shareholders at the end of a fixed term.

The price at which a company can repurchase these redeemable preference shares is already decided at the time of issuing such shares.

Before the adoption of Ind AS (Converged IFRS), Redeemable preference shares were classified and accounted in the Financial Statements under “Equity”.

Impact of IFRS 9: In 2015, post the first-time implementation of Ind AS / IFRS, the media conglomerate (Zee Entertainment) had to classify their Redeemable Preference Shares as Debt which adversely impacted their Debt Equity ratio (leverage) by 0.6 times (vs. 0 times)!

This is because as per IFRS 9, Compulsorily Redeemable Preference Shares contain an “Obligation to pay” and therefore had to be classified as debt in the Financial Statements!

As a stakeholder, this would also mean that the Preference share dividend would now be recognized as an interest expense in the Statement of Profit & Loss instead of being an appropriation out of profit as was the case earlier.

What ‘Substance over Form’ principles would be taken into consideration in determining if Preference shares are Debt or Equity?

When the answer to the above questions is yes, the preference shares would be recognized as a Financial liability (Debt) as per IFRS 9. This is because the issuer has a definite obligation of delivering a financial asset or cash to the holders of the instrument. However, if the answers to the above questions are mixed, then the classification would vary from case to case.

After understanding the implications of IFRS 9 on debt-equity ratios, I hope you will now be able to assess:

I would love to discuss these in detail with you. If you have any doubts or if you’d like to discuss IFRS 9, feel free to drop me a line on my LinkedIn profile! Lastly, if you think this article would prove useful to someone, do share it with them.

We keep conducting 3-hour intense workshops on IFRS 9 for keen learners – keep a check on the next one HERE.