Lease Accounting – Aspects No One is Talking About 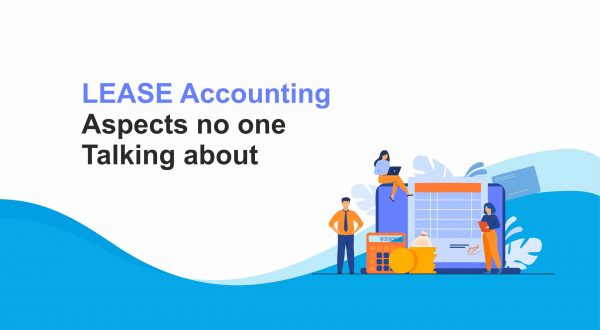 Ind AS 116 – Leases, has already become effective for Companies from April 1, 2019. For listed Companies, this means that the results they declare for Q1 2019 must factor the effect of the new lease standards. Whereas the unlisted Companies have time till the declaration of their annual results for the adoption of the Standard.

Ever since the new Standard is released, there have been many articles which highlight what are the effects of the Standard on a company’s financial statement. So, unless you live under a rock, you would have already heard about it. To bring you up to speed, some significant implications of the new Standard are:

1. No operating lease – all leases will be accounted as a finance lease.

2. EBITDA Enlightenment – With rent expense converted to interest expense and depreciation, the EBITDA will show an improvement. (Well, a point to note is, EBITDA is a non-GAAP measure, i.e. not shown on the face of Statement of profit and loss. So, it’s a measure used by analysts and investors, don’t know why as interest and depreciation are recurring charge of running a business)

3. Changing the ratios – the lease standard brings in newer assets (Right-of-use) and liability (lease liability) leading to change in important ratios such as Return on Assets and Debt-Equity ratio. This has called for corporates having loan covenants to immediately reach out to their lenders and re-discuss these relevant matrices unless they want to end up breaching the covenant and face hassles that go with it. (Well, some people do like excitement.)

Now let us take a more in-depth look at some finer points in this new lease standard which we do not hear so much about. These are the bitter nuances not discussed in boardroom (because they are boring – I meant the details, not the board members), and expected to the handled by the finance team, who were not nominated for any Ind AS / IFRS training as they are busy working on these new Standard (Huh, the irony!).

So, here are 4 such critical aspects that should help you get a better grip on the Standard (there are many more pointers, but I think these 4 can help you get started). All these points are from the lessee perspective (come on, who talks about lessors anyway!)

a. Short term lease is a lease, at the commencement date, has a lease term of 12 months or less and does not contain a purchase option. Not the remaining lease term on the date of transition or period end but the total lease term estimated on inception is considered.

b. Assets are be considered as low value in absolute term. Some examples of low value assets as given by the Standard are – tablet, personal computer, small items of office furniture and telephones.

In case of short term lease or leases with underlying asset value is low, the Standard provides an option to either account it as operating lease or account it is Right-of-use.

What many have assumed is that if the lease fits into either of this category then it must be accounted as operating lease. Unless one realizes that this is an option they are likely to make incorrect decision.

This is a good option to not let your loan-covenants get affected and avoid lender discussion by opting the operating lease accounting. Like-wise it may be more prudent for companies to account for all lease (even if they belong to this category) as Right-of-use, if there are volumes of such leases and if EBITDA is an important parameter.

Choices can be made only when one is aware of the options.

2. Impact on transition – Lessee can opt for either of the following transition approaches:

a. Retrospectively to each reporting period – Under this approach the new lease standard is applied to all the reporting period as if the lease standard was always applied. All earlier period rental expenses are written back and the effect of interest expenses and depreciation is accounted. This results in the impact accounted in retained earnings at the beginning of the earliest reporting period i.e. while preparing the financials for Mar 2020, the comparative year end will be Mar 2019 and the effect of transition will be accounted on the retained earning as of 1 April 2018.

b. Retrospectively with the cumulative effect of initially applying the Standard recognized at the date of initial application – This is same as point (a) with the only difference being that the effect of transition will be accounted on the retained earning as of 1 April 2019 (the date of transition)

Certain pointers which doing the transition working are:

-> Operating lease having a remaining life of less than 12 months as on the transition date can be kept out of the working i.e. they can be continued to be accounted on straight-line basis. This is an option.

-> Right-of-use assets can be accounted at a) Lease liability on commencement of the lease term which is depreciated for the lease term lapsed. or b) lease liability on the date of transition adjusted for any prepaid or accrued lease payments (i.e. rent straight lining). Option (b) is will result in no effect on retained earnings.

3. Treatment on cash flows – While determining the cash flow from operations we adjust the following 2 items (something we learned in our college days):

Under IGAAP rental expenses was never adjusted as it is considered as an operating item, as these leased assets were used in the operating of the business. However, the new Standard replaces rental expense with interest expenses and depreciation, and it does have a impact on the cash flows as well.

The depreciation being non-cash expenses will be added back to the cash from operating activities, the payment of installment (Principal component) will be reflected under investing activity and the interest component will get classified as financing activity.

This surely put cash from operations in a positive light. This new Standard increases cash from operating activity even without a new penny of cash added to the business, beautiful isn’t it.

While all components of a financial statement are prepared on accrual basis only cash flow statement is prepared on cash basis. The entire idea of a business is to run an operating cycle and generate cash out of it and cash from operating activity is the prime indicator of how well the company can do this. This new Standard defiantly dilutes this perspective.

In determining the Lease liability i.e., the present value of all the future minimum lease payments a discount rate is required. This rate should be the interest rate implicit in the lease, this can be determined only if the cost of the asset is available so that the difference between the total lease value and the cost is considered as the interest component. However, it is likely that this is not available in most of the case (except for intercompany transactions).

In such a case, the discount rate can be considered as the incremental borrowing rate. The rate of interest that a lessee would have to pay to borrow over a similar term, and with a similar security, the funds necessary to obtain an asset of a similar value to the right-of-use asset in a similar economic environment.

So every time a new lease it taken or there is any modification the discount rate should be worked out as per the specifics of the lease. There is no single rate that will fit all the leases and all the companies.

This seems to be a nicely crafted standard (by IASB who prepared IFRS – 16, India just “converged” it) and the working and implementation can be easy if you have 10 odd leases. I did say you will be facing challenges if you have more lease and haven’t began implementation till now.

Hoping that this article will help in bringing more clarity on the Standard. Watch out this space for more insights on IFRS 16. Do share with your friends who might find it helpful.

To know more on the practical implications of IFRS 16, feel free to drop me a line on my LinkedIn profile!

Join 50,000+ professionals, and get our latest insights delivered straight to your mailbox.

50,000+ PROFESSIONALS, AND GET OUR LATEST INSIGHTS DELIVERED STRAIGHT TO YOUR MAILBOX.

Facebook-f Twitter Whatsapp
[contact-form-7 404 "Not Found"]
Open chat
Chat Now
Hello! We'd love to hear from you, so feel free to drop us a line.